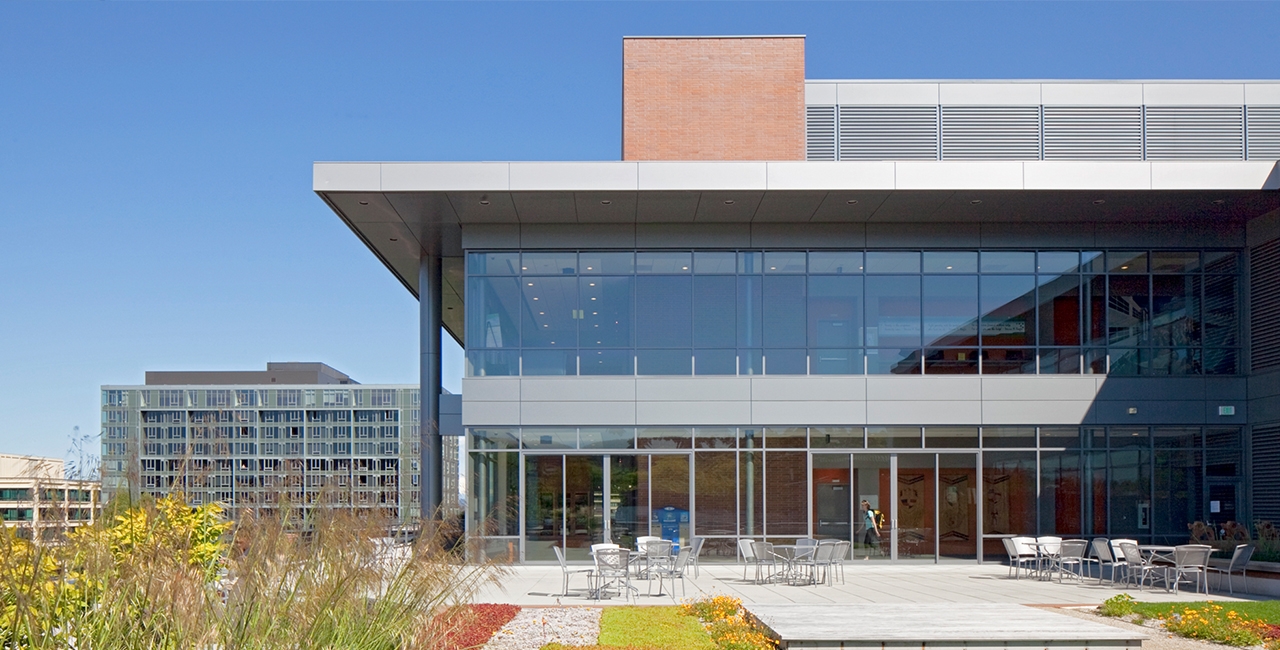 The Portland State University (PSU) Academic and Student Recreation Center (ASRC) is located on the campus of Portland State University in the heart of downtown Portland, Ore. The 208,000 square feet building serves as the new home for the PSU School of Social Work, the Oregon University System Chancellor’s Office, the PSU Student Recreation Center, the PSU Bike Hub, the City of Portland Archives, as well as other retail and restaurant tenants. Its central downtown urban-infill location, where an outdated single-story structure once stood, capitalizes on existing utility infrastructure and public transportation, with light rail, streetcar, and bus routes directly adjacent.

This fast-tracked design build project presented challenges to the design team, not only with regards to schedule and budget, but also challenges associated with accommodating the many different uses, tenants, and occupancy types within the building. Mechanical systems needed to be designed to address the needs of classrooms, offices, retail, a gymnasium, restaurants, natatorium, multiuse rooms, and archive spaces. Additionally, all of the complex interactions between building systems and tenants needed to be accurately modeled to estimate energy consumption. In the end, the project was delivered on time, within budget, exceeded its LEED target, and has been consuming less energy than predicted.

The following is a summary of the main building systems, energy savings strategies, and design considerations implemented at the PSU ASRC. Also included is information on the building’s predicted and actual energy use.

One of the central energy savings strategies at the ASRC was the reuse of an existing groundwater extraction well. Underneath an existing sidewalk directly adjacent to the project site was an old 170 ft (52 m) deep groundwater well, which was constructed in 1968, and served the previous building’s mechanical systems in a single-pass configuration. The groundwater was pumped from the ground by a vertical line-shaft pump, where it was then used by the previous building’s mechanical equipment, and then discharged directly to the sanitary system.

The design team saw this existing groundwater well as a valuable site resource that could be used for the new six ­story ASRC facility. The existing well could produce 340 gpm of 56°F (21 Lis of 13°C) water, which was calculated to be enough to provide direct cooling for the new facility on all but the warmest periods of the year. To supplement the cooling provided by the groundwater on the warmest periods of the year, a small supplemental air-cooled chiller was designed into the new system. In addition to rehabilitating the existing well to like-­new condition, a new injection well was drilled to deliver the groundwater back to the aquifer, instead of dumping it to the sanitary system as the original building did.

Iron fouling bacteria, as well as other forms of contaminants can be an issue with open loop groundwater systems. As a precaution against contamination, as well as to hydraulically isolate the building systems, plate heat exchangers were used to separate the groundwater loop from the building’s water loops. Additionally, a new premium efficiency pump motor was provided and controlled with a variable speed drive. The variable speed drive allows for slowly ramping up or down of the groundwater flow to meet building demand, as well as reduce disturbed sediment from being brought up by the well.

The building heating water is provided by two high-efficiency condensing natural gas boilers with 15: I burner turn down capabilities and boiler management system. The condensing boilers are complemented by a building distribution system that is configured with variable-primary pumping that minimizes pump energy. It features variable speed pumps, two-way valves, and a minimum flow bypass. Each 3,000 MBh (879 kW) boiler is sized for approximately 50% of the total building load, allowing the boilers to modulate in unison to precisely meet the building load, as well as to maximize the efficiencies of the boilers by maintaining as low a firing rate as possible. The heating water loop serves the variable air volume terminal unit reheat coils, air handler heating coils, radiant floor, hydroponic finned tube, pool, spa, water source heat pump (WSHP) loop, and the domestic hot water system. The pool, spa, and domestic hot water systems are separated by individual plate heat exchangers. The boilers are located in a penthouse on the roof. The main heating water system risers extend from the penthouse to the basement and were sized for full system flow. This allows the university the future flexibility to connect the building at the basement level to the campus heating system.

A large portion of the building is served by a custom 105,000 cfm (49554 Lis) variable air volume air handler, which is located on the roof. The air handler includes a multi-fan array of 14 direct drive fans operated by variable speed drives, chilled water coil, heating water coil, MERV-13 air filtration, and an outdoor airflow measuring station. Relief fans are provided separately on the roof and are operated by variable speed drives.

To complement the groundwater based cooling system, the duct systems in the building were sized for 60°F (16°C) supply air rather than the more typical 55°F (13°C) supply air. This increases the amount of time when the building can be entirely cooled by outside air and eases the task of the groundwater to cool the air. An added benefit of this is that when outdoor air temperatures permit, the supply air temperature can be reset down to 55°F (13°C), resulting in lower airflow requirements and associated reduced fan energy consumption. The reheat energy penalty associated with the reduced supply air temperature is minimized with the fan-powered terminal units. To further draw benefit from the groundwater-based cooling, the air handler was specified in a blow through coil configuration. This allows the fan heat to be removed at the coil.

The 17,000 square feet gymnasium, located on the third level, is served by a dedicated indoor air handler with chilled water coil, heating water coil, MERV-13 air filtration, and variable speed supply fan. Economizer air relief is provided separately by a set of motorized dampers to the exterior. Like the main variable air volume air handler, this air handler has a blow through coil to take advantage of the groundwater-based cooling. Zone air movement is enhanced by six 12 ft (4 m) diameter high-volume low-velocity destratification fans that are controlled by occupant-adjustable variable speed drives. To help maintain good indoor air quality, the outside air intake is ducted from the roof level, away from sources of ground level pollution such as street vehicular traffic.

The natatorium is located on the second level and features an 82 ft (25 m) seven lane lap pool, and a 12 ft (4 m) diameter spa. Spaces where pools operate pose challenges for maintaining good occupant comfort, indoor air quality, energy savings, and maintaining an environment that does not damage the building. If humidity rises too high, the structure can corrode, causing losses in envelope and sometimes structural integrity.

The design team incorporated measures to reduce the likelihood of condensation, as well as to provide for good indoor air quality. Following guidance provided in ASHRAE Handbook-HVAC Applications, the air distribution was designed such that the envelope is washed with supply air to help prevent condensation. Additionally, a small portion of the sup­ply air is delivered across the pool level. This air movement across the pool helps to carry harmful air contaminants, such as chloramines, away from the swimmer’s breathing zone. To further reduce the amount of chloramine contamination, the pool water is treated by ozone, and the natatorium is isolated from the rest of the building by vestibule doors and kept at a slight negative air pressure.

A natatorium can be a large energy burden on a building. To help reduce energy use, the design team incorporated measures such as outside air-based dehumidification as opposed to DX based, as well as variable fan speed control based on space dew point. The natatorium unit uses information from the building automation system to compare the outside temperature and the indoor dew point to determine the likelihood that condensation may occur at the envelope perimeter. When the likelihood is low, the system reduces the circulating fan speed to save energy. This is particularly useful during unoccupied periods when a pool cover is in place, and the evaporation load is much less than the maximum design amount. Natatorium units typically have fans running at l 00% continuously to maintain humidity conditions. The natatorium unit also has air-to-air sensible heat recovery, as well as water-side condenser heat recovery.

The ASRC is also home to the City of Portland archives. Four spaces associated with the archives must be kept at specific environmental conditions to help preserve sensitive archived materials.

Two separate storage areas, totaling nearly 20,000 ft2 (1858 m2), must be kept at 63°F (I 7°C) DB and 40% RH year-round. With such a low required dew point (38°F [3°C]), refriger­ant-based DX systems can be problematic. To meet this low dew point, the design team specified two dedicated desiccant­based dehumidification air handlers. Each air handler consists of three air filter sections (MERV-8, 11, and 15), a desiccant dehumidification section with electric heat regeneration, DX cooling, supply fan, electric heat, and humidifier. For redundancy, the two air handlers have the supply and return duct­work tied together and are isolated with motorized dampers. If one unit is out of commission, it can be isolated, and the other unit will pick up the load.

The archives office space is required to be kept continuously at 70°F (21°C) DB and 45% RH (47°F [8°C] dew point). To accommodate the many different thermal zones of the office space, a stand-alone variable air volume system was designed for temperature regulation. To dehumidify the zones, dry air from one of the archives storage air handlers is diverted to the variable air volume system as needed.

Near the entry to the archives office on the fifth floor is a small display case. This case must be kept at the same conditions as the main archive storage areas (63°F [l 7°C] DB/40% RH). After much searching for packaged equipment to fit the need, it was realized that a custom system was required. To maintain these conditions, humidity control was accomplished using dehumidified air from the fifth-floor archives storage room, ducted through a small chilled water fan coil, to the display case, and then returned to the stor­age room by a transfer fan. The fan coil, which handles the sensible envelope and lighting loads of the display case, is provided with chilled water by a small electric water cooler, pump, and buffer tank.

To help reduce envelope-related humidity loads in the ar­chives areas, a vapor barrier was provided in the wall assem­blies, and all the zones were blower door tested to find and seal envelope leaks. To help reduce duct leakage-related humidity loads, the air handler ductwork was sealed, and pressure tested to SMACNA leakage class 24 requirements.

The ASRC went through extensive energy modeling and review as required by LEED, as well as the Oregon Depart­ment of Energy’s (ODOE) State Energy Efficient Design (SEED) program. The SEED program directs state agencies to work with the Oregon Department of Energy to ensure cost-effective energy conservation measures are included in new and renovated publicly funded buildings. The energy modeling was based on ASHRAE/1 ESNA Standard 90.1- 2004 and used eQUEST version 3.64 for the energy mod­eling software. The baseline, proposed, and measured EUI values are as follows: