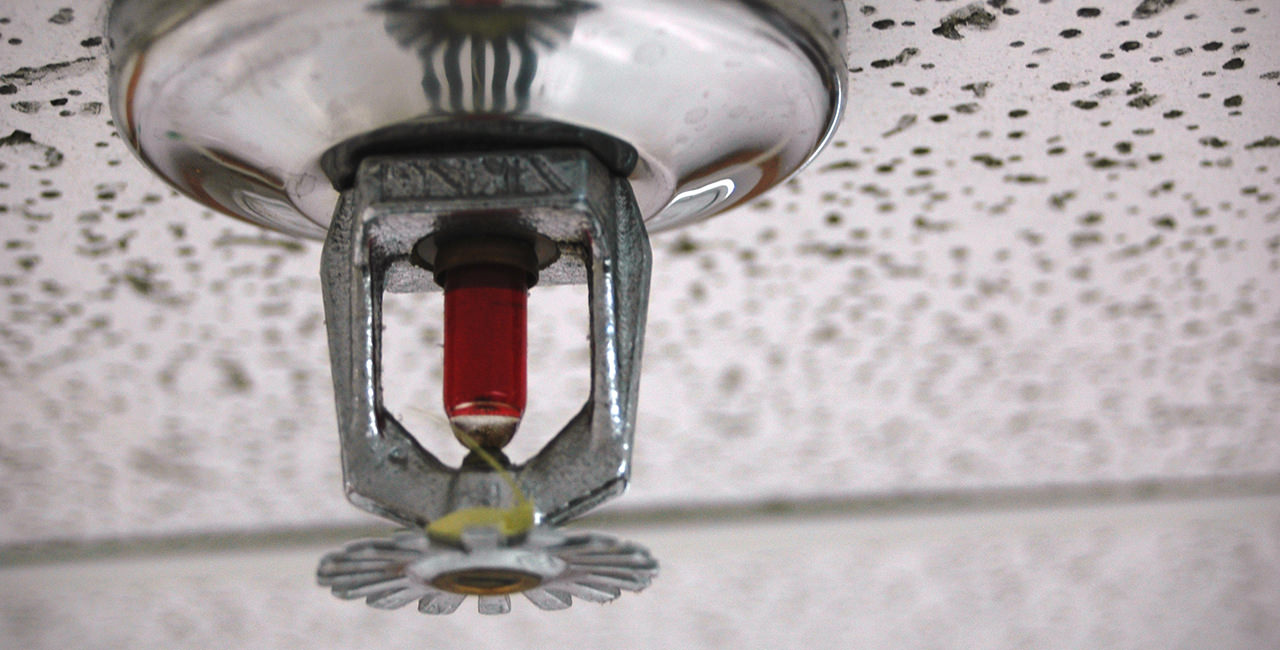 Fire protection for buildings and their occupants consists of various elements. This is an overview of the International Building Code’s (IBC) elements and integration of both passive and active fire protection to reinforce one another—and to cover for one another in case of failure of any one element.

Once a fire has started, its impact is influenced by previous choices of combustible objects and construction in the room of origin, which impact the heat released and the path of the fire along vertical and horizontal surfaces.

Active systems work to detect, control, suppress, or extinguish fires. They rely on an action to trigger their involvement, either manual, electrical, or mechanical. A detector needs activation of a sensor detecting smoke or heat or flame to send a signal to a notification device such as a bell, a horn, or a strobe to alert occupants and responders or to send an electronic signal to another active protection device such as a valve supplying water or opening a canister of fire-suppressing gaseous agent. Or, the detector can send a signal to a releasing device such as fire door closers or to activate smoke evacuation fans. A sprinkler needs heat to open it, either 1) to melt a heat-sensitive solder that then releases barriers in the sprinkler orifice and to ready the sprinkler to discharge water when it is available, or 2) to boil the fluid in a small glass bulb of the sprinkler, again releasing orifice barriers and preparing the sprinkler for water discharge. Manual pull stations can activate fire alarms notification devices (bells, horns, strobes, etc.) and releasing devices, clean agent suppression systems, and some kinds of sprinkler systems.

Fire alarms: Active fire protection, in the form of fire alarms, tends to activate first, giving occupants the opportunity to evacuate and notifying first responders. Alarms need to be tailored to the building construction type, configuration, and occupancy use. An analysis of the building elements and hazards will dictate whether the best protection can be achieved by ionization or photoelectric smoke detectors, an air aspirating very early smoke detection apparatus (VESDA), or by heat or flame detectors or optical detection methods. IBC 907 and NFPA 72: National Fire Alarm and Signaling Code address fire alarms.

Fire alarm effectiveness can be hampered by the choice of inappropriate alarms for the environmental conditions expected, which can cause nuisance activation and ignorance of a real fire event. The second barrier to effectiveness can be human behavior—the tendency of people to ignore the alarm, to decide that the horns and strobes activating are “not the real thing,” and to delay evacuation of the building.

Fire sprinklers: IBC Section 903 and NFPA 13: Standard for the Installation of Sprinkler Systems address fire sprinkler systems, which are the most common form of active fire control and suppression. Wet pipe sprinkler systems are the simplest and fastest method of control. Water filled pipes are ready to immediately spray water upon the activation of each individual sprinkler head, which activate due to heat.

Dry pipe sprinkler systems have pipes filled with compressed air or nitrogen gas, which holds the clapper on a dry pipe valve in the closed position. If a sprinkler activates, air pressure is lost in the system, which then allows the dry pipe valve to open to fill the pipes with water, which discharges out of any sprinklers opened by the heat of a fire. Because of the delay in filling the pipes with water and being available to discharge from the sprinklers, the fire area can grow larger and the fire intensity can increase before water is applied. More sprinklers can be expected to open. The result can be a larger area of fire damage and more water damage.

Preaction sprinkler systems also have pipes filled with compressed air or nitrogen, but require activation of a detection device to open a deluge valve to fill the pipes with water. These can be of single- or double-interlock style, depending on the number of events designed to open the deluge valve. These are popular for protection of areas where the risk of inadvertent water application and leaks needs to be minimized: data centers, museums, sensitive hospital equipment rooms, computer server rooms, and the like. Like wet and dry systems, preaction systems only discharge water out of individual sprinklers that have opened due to heat. Unlike wet and dry systems, preaction systems are designed to minimize water damage due to broken sprinklers and/or broken pipes.

Deluge systems have pipes and sprinkler nozzles open to the atmosphere and require a detection device to open a deluge valve, which allows water to discharge from all sprinklers at once—like in Hollywood movies. Unlike the movies, these systems are normally used in high-challenge areas, such as for flammable or combustible liquids protection, but may also be used to protect a corridor opening where a fire rated assembly is required.

Alternate methods of fire protection: In the IBC and International Fire Code Section 904 are listed several alternate methods of fire protection. These include high-pressure water mist systems (fog), and clean agent gaseous suppression systems such as 3M Novec 1230 Fire Protection Fluid and DuPont FM-200 Waterless Fire Suppression Systems, which act as coolants. Inert gas systems employing atmospheric gases that lower the amount of oxygen in a room to levels below those needed to support combustion are active means of fire protection. Other alternate methods include high-pressure water mist systems, where water supplies are limited or where water damage needs to be limited and fixed aerosol extinguishing systems, CO2 extinguishing systems, and various types of foam systems. The old Halon gas systems have been banned in most areas of the world due to environmental issues. IFC Section 904 and NFPA Standards 16, 17, 2001, and 2010 address these alternate systems.

Standpipes: In buildings of a certain height or use and located in stairwells and certain horizontal exits, standpipes are a system of piping and fire hose valves that act as vertical sources of water for firefighting, similar to fire hydrants in the street. Standpipes can be filled with water (wet) or empty (dry) with water supplied by fire responders. If wet, the pressure to operate them can be supplied by fire responders (manual) or automatically, usually by a fire pump. IBC Section 905 and NFPA 14: Standard for the Installation of Standpipe and Hose Systems address standpipes.

Handheld extinguishers: IBC Section 906 and NFPA 10: Standard for Portable Fire Extinguishers dictate the type and placement of handheld fire extinguishers for occupant use, depending on the hazards present in the building.

Passive systems require no external power. They can be grouped into three categories: limiting the growth rate of the fire, compartmentation of the fire, and providing emergency egress from fire areas.

Limiting the rate of fire growth and subsequent smoke: Fire growth can be limited to some extent by choice of interior finishes that limit ignition, flame spread, and heat release, allowing more time for active fire protection systems to activate and more time for safe occupant evacuation. Wall and ceiling finishes and floor coverings cover large surfaces. If these ignite easily, they can have a significant effect on the spread of fire and can lead to “flashover” of the hot gases in the room, from which there is no survivability. For this reason, materials for interior finishes may be subject to specialized testing to determine their flame spread rating. Fires generate particulate matter, which hangs suspended in the air, obscuring visualization of exit signs. The distance at which an exit sign is obscured by smoke is directly affected by the amount of smoke. For this reason, the building codes limit interior finishes that produce an excessive amount of smoke. Most model building codes do not address the issue of the toxicity of smoke and gases produced by fire.

Compartmentation: If the limitation of interior finishes and active fire protection measures such as detection and suppression fail to limit the fire to the room of origin, the next strategy is to contain the fire and smoke within a certain zone for a certain amount of time, delaying flame and smoke spread throughout the building. Compartmentation is a passive method of fire protection that confines smoke and fire into zones. It works to protect the building’s structural integrity and provides protected spaces through which building occupants can evacuate. Fire-resistive structural elements, floors, ceilings/roofs, and walls are critical. Equally important is protection of doors and windows and protection of structural penetrations, such as pipe, cable, electrical conduit, and duct penetrations. Fire and smoke dampers to prevent the passage of smoke within building systems, such as HVAC systems, are also crucial. Fire can adversely affect load bearing assemblies that need to remain effective for their specified time to prevent collapse of the building or portions thereof, to prevent the spread of fire and smoke, and to prevent injury and death of occupants and firefighters.

Fire spread at exterior facades, which may include plastics, exterior insulation finish systems (EIFS), and flammable exterior claddings and roofing materials, is limited by the IBC.