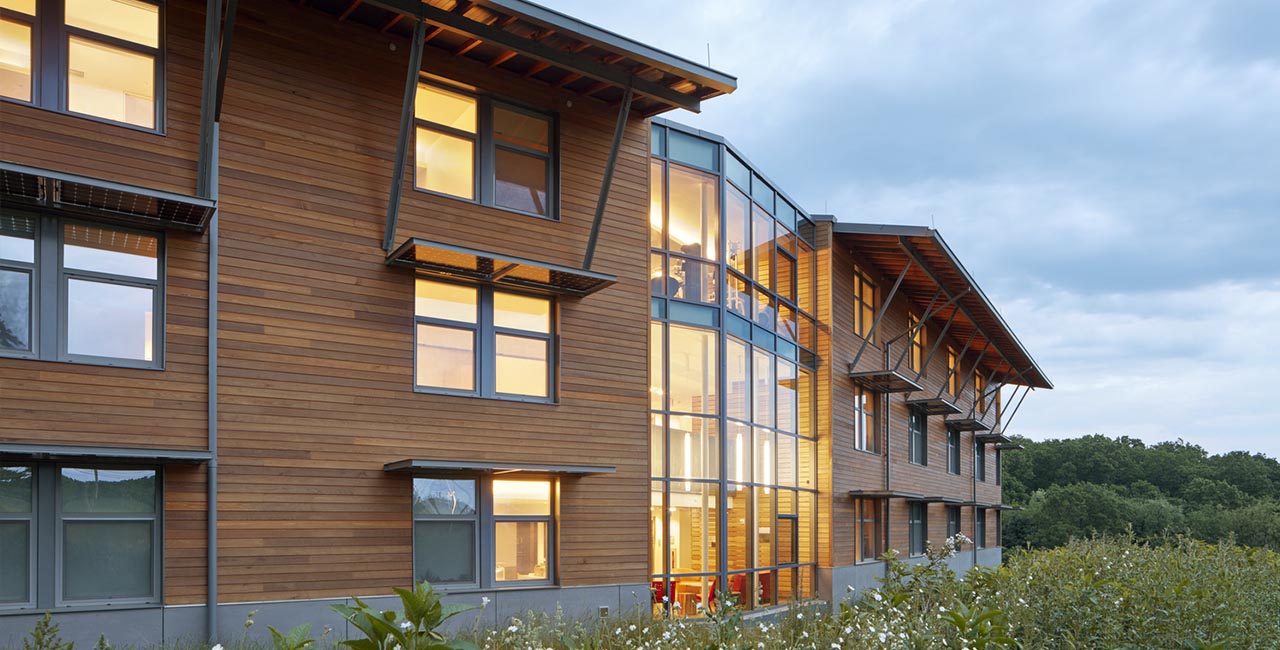 Sustainability is at the heart of the vision that Chatham University has for the Eden Hall Campus. The new campus, located just outside of Pittsburgh, PA, is meant to exemplify Chatham’s commitment to sustainability and environmentalism. The buildings serve as the foundation for a campus built from the ground up with sustainability as the focal point. The design goals for every building on campus are anything but standard. Each building is required to be Net Positive Energy and become LEED Platinum certified. Through a partnership with Mithun, Interface Engineering, Inc. has helped to design a collection of buildings that truly push the envelope and help to redefine the built environment.

The Commons building is a combination of a commercial kitchen, cafeteria, lecture halls and classrooms. Interface Engineering employed radiant heating and cooling through the floor and energy recovery units for ventilation to temper the extreme outside air temperatures. Microturbines are utilized to provide a cost effective and space saving replacement to PV. These units are fed by natural gas currently but have the flexibility to be fed by biogas if Chatham moves forward with plans to construct an anaerobic digester on site. In the process of creating electricity, the microturbines create waste heat which is recovered and used to help preheat the heating hot water. Waste heat is also recovered from the compressor from the walk-in freezer as well as the energy recovery unit serving the kitchen hoods.

Designing a highly energy efficient kitchen was by far the most difficult obstacle that the design team and owner had to overcome. The most straightforward way to measure the energy efficiency of the kitchen is the Energy Use Intensity, or EUI. The EUI of a building is the ratio of energy used per square foot. A smaller EUI represents a lower energy usage. Some buildings are inherently going to use more energy than others by the nature of the building. For example, hospitals, labs and kitchens will use more energy than office buildings or residences. There is a campus goal to reach an average EUI, of 20. The EUI of 20 was chosen because it represents the energy performance required to achieve net-zero energy with roof-mounted PV. A typical EUI for a commercial kitchen is 325, which far exceeds the Campus goal of 20. While there was never an expectation that this building would reach and EUI of 20, everyone wanted to know how low we could push the EUI. Preliminary energy modelling results put the building at an EUI of 234 due largely to a highly efficient envelope and the geothermal heat pump system serving the building. Due to the purpose of the building, there are no easy cuts to make. Many components in a kitchen are necessary for the function of the building and cannot be removed or altered significantly. This poses a significant challenge because the design team on its own cannot alter the programming of the building without input from the owner and users.

It became clear early on that the only way to truly reduce the EUI beyond typical savings would have to be a combination of ingenuity and practical changes in standard practices that involved the kitchen staff, owners, users, mechanical, plumbing and electrical engineers, kitchen consultants and architects. A design charrette was held to bring all these groups together for a truly collaborative design process. The charrette went through every aspect of the kitchen ranging from the type of walk-in freezer used to the number of days hot meals would be provided. For each item, a standard practice, efficient practice and radical energy reduction strategies were discussed. Mechanically, variable flow hoods with energy recovery off of the exhaust were added to the design. A remote refrigeration loop was added for the walk-in freezer to remove that load from the building. The kitchen equipment was changed to use induction ranges and griddles throughout. These revisions brought the EUI down to 97.6 which represents a 60% savings compared to the original modeling results and 70% savings compared to a standard commercial kitchen. By bringing the design team together with the owner and users, we were able to achieve results that truly redefine the expectations of the built environment.

Taking Geothermal to the Next Level

By centralizing the geothermal field, the number of boreholes necessary can be reduced. The reduction is due to the fact that each building hits its peak load at a different time. Therefore, the total size of the field is not determined by the sum of the peak loads, but rather by the sum of the largest combination of loads. For example, the Commons Building represents the largest demand for cooling on campus and the peak load occurs in the hours leading up to and after dinner. At this time, the Orchard House Residence Hall is empty as the students are at dinner. Therefore, the geothermal field only needs to serve the Commons building’s peak while the Residence Hall has very little load. By analyzing the load profiles of the buildings and comparing when the peaks occurred, Interface was able to determine the right size of the field. This process reduced the number of boreholes needed. As a result, this strategy saved time on the construction schedule, reduced the pump energy needed to operate the field and reduced the first cost of the system.

Aside from these benefits, one of the more interesting advantages of centralizing the geothermal field is that buildings on the geothermal loop share wasted energy. For example, the Commons building will be in cooling for the majority of the year and as a result will be rejecting hot water into the geothermal loop. This energy raises the temperature of the loop. In winter, other buildings will be in heating mode and can use the wasted heat energy from the Commons to help mitigate their heating demand. A symbiotic relationship between the buildings is formed where one building’s waste is another’s free energy.