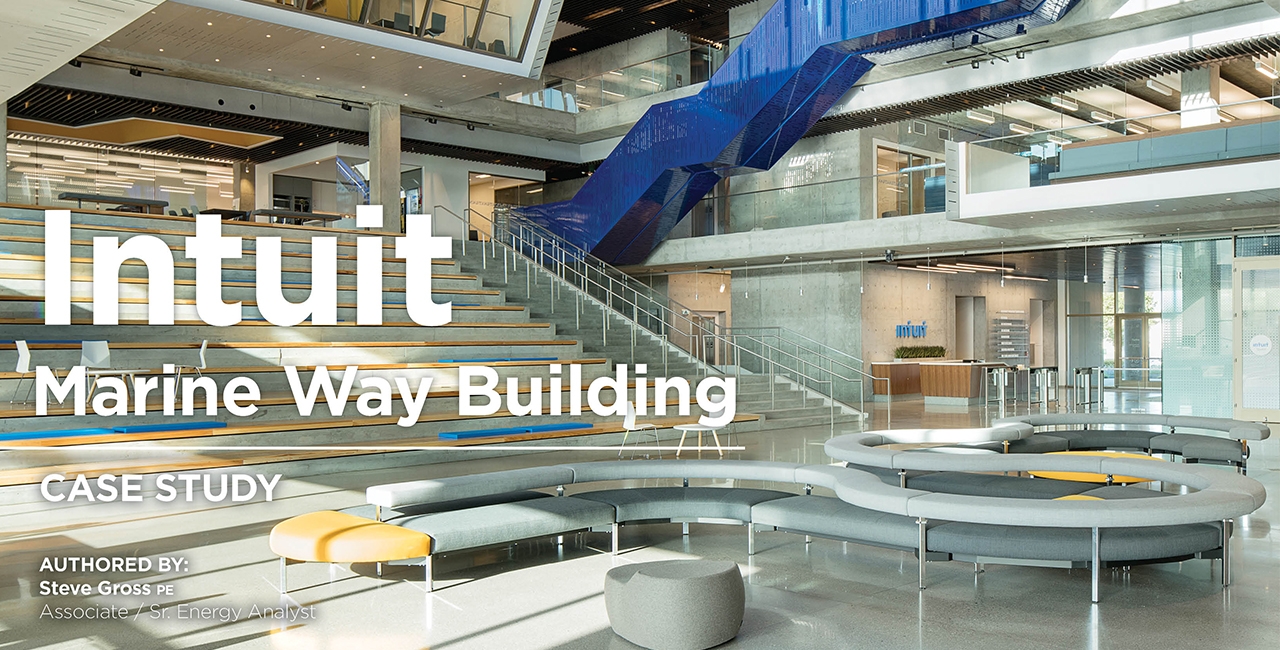 Interface Engineering provided Design Build services (HVAC, Plumbing, and Fire Protection), as well as sustainability consulting, computational fluid dynamic (CFD) modeling, energy modeling services, and measurement and verification (M&V) for Intuit’s new headquarters totaling 185,000 GSF located in Mountain View, CA. The so-called Marine Way building houses office and conference space for the Silicon Valley technology firm. The project has achieved LEED Platinum certification, a first in the U.S. for Intuit, and utilizes roof-mounted PV panels to achieve a 20% renewable energy fraction. The building was occupied in the Fall of 2016 and is in the M&V phase.

Energy efficiency was a primary focus of the design of the Marine Way Building, and to that end, a rigorous conceptual design phase efficiency charrette was held with all of the project’s stakeholders, including the owner, facilities personnel, architect,engineers, and future occupants. The goal of the charrette was to brainstorm how the building’s form and facade could contribute to energy efficiency and occupant satisfaction without sacrificing the desired aesthetic. Interface Engineering provided energy and thermal modeling services for this conceptual phase, and helped the design team to arrive at a fritted curtain wall system that incorporates a MechoSystems SolarTrac automated shading system. This system controls each curtain wall bay independently, in response to real-time sky conditions, to maximize daylighting harvesting while always preventing glare and direct solar beam onto the occupants of the open office. This automated shading system was estimated to reduce the annual utility costs of the building by approximately 2%, compared to manually operated window shades.

The building’s mechanical design incorporates an under-floor air distribution (UFAD) system. The team,having substantial experience with UFAD systems, decided to alter the traditional system design by de-coupling interior loads and building ventilation from perimeter heating and cooling loads by incorporating a perimeter overhead radiant panel system. In the open office spaces, this allowed all the typical fan powered boxes, ductwork, and reheat to be deleted,as well as eliminated the detrimental thermal losses typical of UFAD systems.This approach also eliminated concerns of distribution losses that are atypical compliant of UFAD systems at the perimeter.

The UFAD system allows an elevated supply air temperature of 62°F to be used, which in turn allows an elevated chilled water temperature of 52°F to be used (versus the traditional 55°F and 44°F, respectively). These milder temperatures result in an extremely high chiller efficiency of 0.50 KW/Ton at design conditions and a NPLV of 0.3KW/Ton. It also allows the integrated waterside economizer to function for approximately 1,500 additional hours, and the airside economizer to function for an additional 2,700 hours per year. The mechanical design also eliminates reheat by using the perimeter radiant panel system, which is provided heating hot water from a 95% efficient condensing boiler plant.

The lighting design utilizes high efficacy continuously dimming fixtures that are controlled based on available daylight, and achieved a lighting power density of 0.66 W/ft2. The result is a 57% reduction over the ASHRAE 90.1 baseline building’s lighting energy consumption.

These energy conservation features combine to reduce the annual energy cost of the Marine Way Building by 40% over an ASHRAE 90.1 baseline building. The final energy model predicted the building’s EUI to be 41.2 kBtu/ft2-yr, before accounting for renewable energy production. The building’s 385 KW roof-mounted photovoltaic system further reduces the annual energy cost, resulting in a 55% annual cost savings over the ASHRAE baseline,as well as achieving 20% renewable energy fraction.

Interface recently completed a 12-month measurement and verification (M&V) for the project,which has revealed that the building is performing very close to what the energy model predicted. The building is provided with an array of end-use sub-meters which allow trending of HVAC, lighting, and receptacle consumption. From an annual perspective, the building is consuming 5% more energy than predicted by the modeling software (IES-VE), resulting in an actual EUI of 43.26 kBtu/ft2-yr.

The design team and owner’s desire to innovate was a strong driving force for this project. Starting with the conceptual design charrette and continuing throughout the project, the team strove to achieve a truly high-performance design. The combination of a creative low first cost and low energy mechanical systems, an intelligent façade shading system, and renewable energy system has resulted in a unique space with a small environmental footprint.

One example is that the automated shading system, in concert with the radiant system, allowed for a denser occupancy plan, as workstations could be moved closer to the perimeter than was originally planned while preventing glare and thermal asymmetry. The shading system is custom-programmed to prevent direct solar gain onto occupants, therefore desks could be placed within 3ft of the glazing. This means that Intuit can house more employees in the Marine Way Building and defer the building or leasing of additional office space.

While the project does employ several cutting-edge technologies, traditional boilers, chillers, and air handlers are used for building conditioning. Very little special training or maintenance routines are required, and throughout the M&V process, the facilities staff reports that the building is easily maintainable.

As cost is one of the primary drivers for any new construction project, the design team worked together to find synergies in the design to meet the owner’s goals for the project while also delivering a truly high-performance building. One of the most prominent examples is the UFAD system. The owner required the open office spaces to be provided with a raised flooring system to allow flexibility with respect to space configuration and routing of utilities throughout the floor plate. This presented an opportunity to increase the depth of the raised floor to also accommodate the air distribution system with only a small increase in first cost. This allowed the elimination of steel ductwork throughout the building, as well as VAV boxes and hundreds of control points.

Iterative energy analysis was used throughout the project design phases to optimize the envelope, lighting, and mechanical systems to cost effectively reduce fossil fuel consumption and carbon footprint. The building achieves an Energy Star score of 96. This equates to:

Getting to Zero National Forum