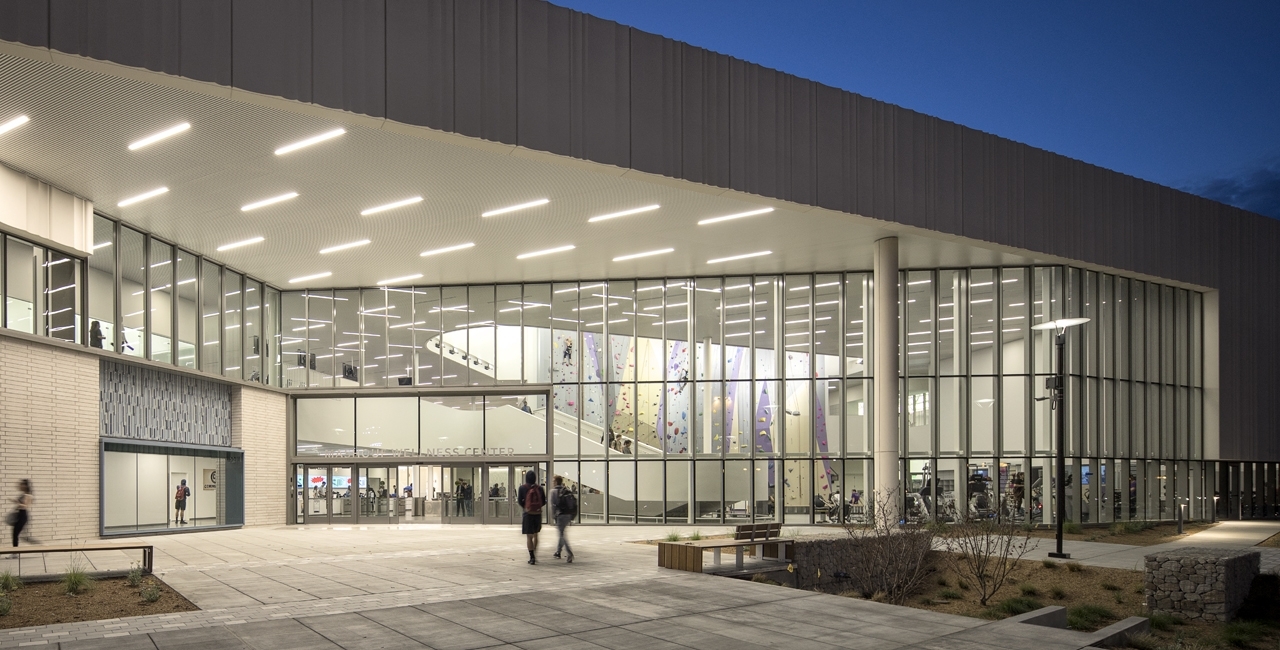 This higher education project pursued LEED Platinum Certification and is anticipating certification in the next few months. The project was occupied in August of 2017.

Per California State University mandates, there is no mechanical cooling provided to the building except to provide dehumidification at the natatorium. The building is provided with heating and ventilation by Variable Air Volume (VAV) Air Handling Units (AHU) with heating hot water (HHW) supplied from the Campus Central Cogeneration Plant. HHW is supplied at 158°F and returned at 118°F.

Significant energy management strategies were implemented into the building. Interface Engineering served as the energy analyst for the project and worked with the architect to optimize the building envelope materials and shading structures in order reduce energy consumption as well as increase occupant comfort by mitigating solar loads (since there is no air conditioning) while optimizing daylighting. The final design incorporated R-19 walls with rigid exterior insulation and an R-32 high reflectance roof. High performance low e-glazing was used throughout with fins and overhangs for shading, again to minimize the impact of not having mechanical cooling.

The natatorium AHU provides 100% outside air to the space. In order to reduce the required heating load, an energy recovery coil was provided to capture the heat from the space exhaust. The supply air temperature to the pool area was also designed to be maintained at 2°F above the temperature of the main pool which decreases the amount of evaporation from the pool surface and thus reduces the amount of dehumidification required.

The building’s high efficiency lighting design incorporated the use of all LED lights as well as daylighting controls and occupancy sensors to achieve a 37.6% reduction in lighting energy. Solatubes were installed in the large gym spaces to increase the available daylighting in spaces with deep floorplates. The project enjoys a very high daylight autonomy.

The combination of these energy conservation measures and optimizations resulted in a reduction of 26% in energy consumption and energy cost over the ASHRAE baseline and 39% savings over 2013 Title 24.

The project is just recently occupied, but a measurement and verification plan is underway which will validate the building performance and will ensure that the systems operate as designed.

This Recreation Wellness Center was designed with a heavy emphasis on indoor air quality. All of the air handling units are designed to be able to increase outside airflow to take advantage of the moderate climate in San Francisco, CA and provide “free cooling” to the building. As a result, occupants are provided with substantially more outside air than in a building where the air systems are sized for minimum ventilation only. In order to maximize the amount of “free cooling” a displacement ventilation system was utilized to provide uniform temperatures within the occupied zone and increases the required supply air temperature. This reduces the number of hours the space will be above the cooling setpoint of 78°F to only 120 hours per year. Interface Engineering went through an exhaustive study to determine the operating temperatures based on differning outside air temperatures.

Additionally, ceiling fans in the exercise rooms help to increase the occupant thermal comfort and all air handling units are provided with MERV-13 filtration to clean the air before it is introduced to the space.

The natatorium has 100% exhaust which eliminates the potential for recirculation of contaminants and odors. The supply air distribution system design (high and low) captures chlorine odors and contaminants at their point of settlement by surface washing the pools at the water level to maximize air quality within the space (low supply air) and wash windows to insure that windows do not experience condensation (fogging) which is typical of many natatoriums with poor HVAC design. Exhaust air was also provided high and low to limit chlorine settlement as well as to evacuate contaminants at the exposed structure to insure structural systems would not rust over time.

Water conservation was also an important feature of this project due to the high amount of water use for a Recreation Center. Backwash water from the pool as well as greywater from the showers and lavatories is captured and processed on site to provide 100% of the non-potable water needed for flushing all toiles and for site irrigation including an adjacent sports field. Low flow fixtures were also used such as lavatories with 0.35 GPM aerators and pint flow urinals. The project originally was planned to use a very high efficiency pool filtration system, however Interface Engineering recommended a water recovery system instead, since it was cost neutral and the building was already dual plumbed due to current regulations in the building’s zoning (although recycled water, despite the zoning, would not have been provided by the utility provided for many, many years). The solution was a win/win as it was cost neutral and allowed the project to take advantage of infrastructure already being installed and supported the adjacent sports field.

An Interface Engineering company standard Facilities Standards Questionnaire (FSQ) was submitted to the campus facility personnel at the very outset of the project. The FSQ includes questions about the existing campus central plant configuration and available capacities and water temperatures to ensure proper connections are provided. Additional questions regarding set points, equipment standards, redundancy, quality of materials, and maintenance programs also ensure that the MEP design is tailored to the facility capabilities and owner expectations.

The project completed Enhanced Commissioning to ensure all systems are operating per design intent. Several meetings with the controls contractor, commissioning agent, facility group, and owner’s representative were held to review building operation. The building opened during a heat wave with outside air temperatures reaching close to 100F. Although there were some spaces (mostly offices) that reached close to 80F, most of the facility was able to maintain the desired 78F during the heat wave.

The design team provided this energy and water efficient facility at little additional cost compared to what was required. The team implemented systems in order to take advantage of requirements imposed by the jurisdiction. This includes the requirement by the San Francisco Public Utility Commission to provide dual plumbing in the building for future nonpotable water connection. Since this piping was already required, we added the grey water treatment system to make use of this piping from Day 1 instead of waiting for the municipality. The project cost was within the same project budget of a typical California State University project using an integrated design process to get the most advantageous systems without adding cost.

As a result of the integrated design process to optimize the building’s envelope, lighting, mechanical, and plumbing systems the building significantly reduced the consumption of fossil fuels and water. The project is currently on track to achieve LEED Platinum certification under Version 3, achieving 55.6% annual energy cost reduction over the ASHRAE 90.1 baseline, reducing greenhouse gas emissions by 828 Metric Tons. This equates to the annual electricity use of 71 homes or 53,115 Gallons of gasoline.

On the Path to Leadership 2018