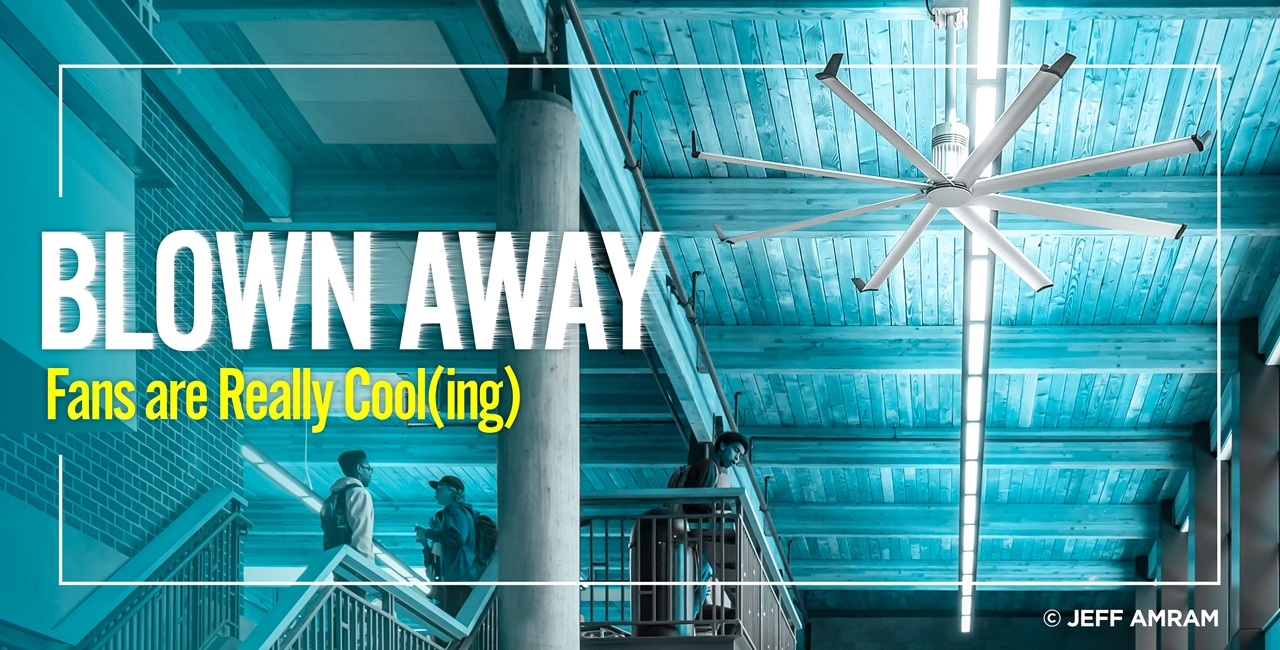 Blown Away: Fans are Really Cool(ing)

I’m often asked, “Hey Steve, what’s the latest and greatest in the world of building energy efficiency?” Recently, my response is “Ceiling fans!”. Nearly as often, my response generates a skeptical grimace from the interviewer/client/owner. And to be honest, I don’t blame them. Ceiling fans seem like old and unexciting news. But the truth is, ceiling fans can solve a lot of thermal dissatisfaction problems in buildings when implemented correctly, as well as reduce the carbon footprint of a building in multiple ways. A properly designed and integrated ceiling fan system can:

Hopefully this list has you excited! As you can see, fans (or more broadly, increased air movement) can do a lot of work. What’s even more amazing is that fan systems are relatively affordable (~$2/ft2 installed cost), making them very low hanging fruit to improve building performance.

I’m sure you’ve heard the saying “you can’t teach an old dog new tricks”. In the case of ceiling fans, we are teaching this old dog new tricks by integrating the fans with the building management system (BMS) and using them as the first stage of cooling. The fans come on when the space reaches 74°F (a typical cooling setpoint) and gradually increase their speed until the mechanical cooling comes on at 79°F. Integration with the controls system and BMS is a critical part of this approach, as everything happens automatically, without needing the occupant to act.

Raising the cooling setpoint 5 degrees has dramatic impact on the annual energy consumption of a building. In three of our recent projects Bay Area, we saw an average energy savings of 6% overall (20% HVAC savings). This effect is even more pronounced in more extreme climates.

The increased setpoint also has a dramatic impact on cooling system sizing, including air handlers, ductwork, and chiller. For the same three recent Bay Area projects, we saw the total equipment capacities drop by 19.5%. This translates to more space available for program and a less crowded ceiling.

It’s not uncommon to have facilities managers and building operates take a skeptical view of this control strategy. They are used to getting “hot calls” when spaces reach 76°F. But the extensive research conducted by the Center for the Built Environment (CBE) shows that the combination of increased air movement and slightly warmer temperatures (around 78-80°F) results in higher rates of thermal satisfaction1. In some cases, satisfaction rates increased from 50-56% of occupants to 77-92%.

Results like these are compelling and very encouraging. Very rarely do we see a design approach that provides so many benefits at such a low cost. I’d like to acknowledge and thank the Center for the Built Environment for their pioneering effort in this research realm, and encourage everyone interested in improving the built environment to check out what they’re doing.