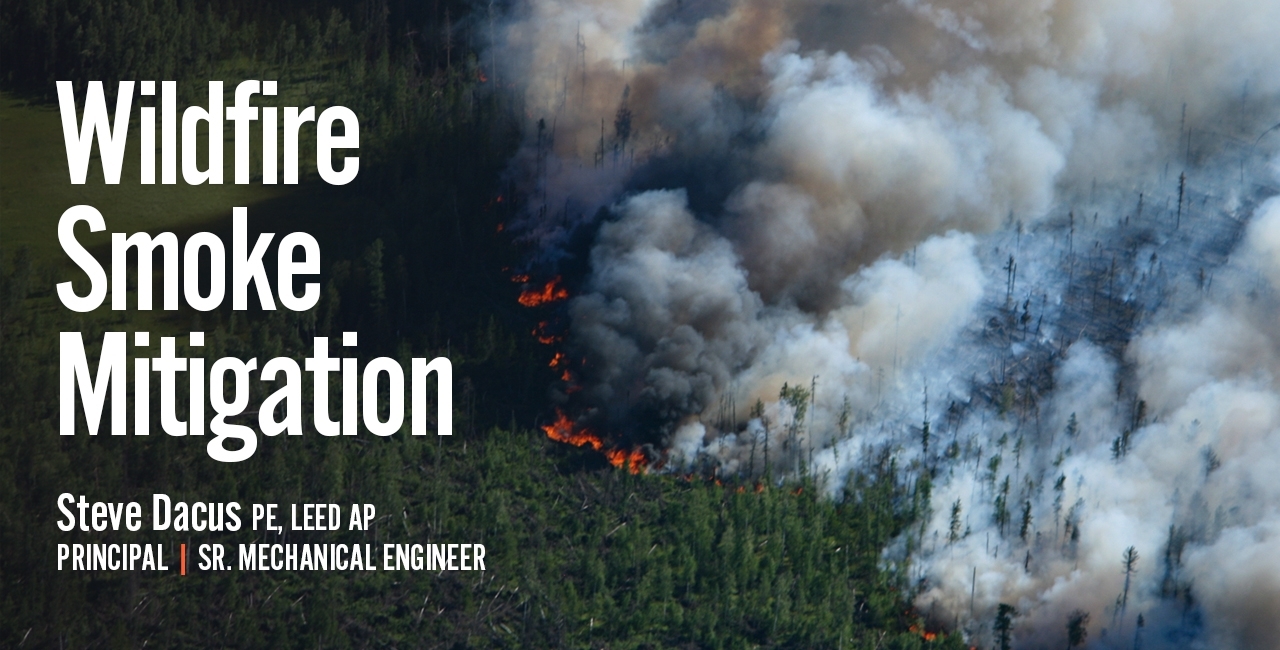 Over the last five years, Washington and Oregon have fought large wildfires and the resulting smoke created by them. Wildfire smoke can cause difficulty breathing and can present health issues for building occupants. Heating, ventilating, and air conditioning (HVAC) systems are designed to bring in fresh, clean air. When smoke is present outside, our HVAC systems draw in that smoke and create hazardous breathing conditions when they were designed to do the opposite.

The DOAS has filters on the incoming outside air side of the heat wheel. However, the filters are only rated at MERV-8. This is a relatively efficient filter that balances cost with particle size captured and resistance to airflow. Wildfire smoke is made up of very small molecules. In order to filter those particles out of the air, High Efficiency Particulate Air (HEPA) filters in combination with charcoal filters are the best way to eliminate the smoke and prevent occupants from detecting smoke odors inside the building. This requires custom air handling systems that are not typically installed in most buildings.

The next best option are MERV-13 filters that are 85 percent efficient at eliminating smoke particles. These filters come in different thicknesses, so the size of the DOAS unit filter rack must be considered. Such high efficiency filters come with an increase in airflow resistance and may cause the DOAS unit to provide reduced airflow than using the original lower efficiency filter. It will also capture a great deal more debris and require changing more often. Outside air will still be able to be brought into the building, although with some smoke smell and harmful particulate present in the airstream.

Another option to consider when wildfire smoke is prevalent outside is to disable the DOAS unit temporarily, since the outside air quality would be much worse than the indoor air with the resulting increased carbon dioxide levels. As shown in the schematic diagram above, the outside air will no longer be delivered to the inlet of each fan coil or to the occupied space. Shutdown of the DOAS system will also have another side effect.

Most DOAS designs use the exhaust from the system for restroom, shower room, or other exhaust. If that system is off, then there is no exhaust occurring. However, if there are dryers or other exhaust systems operating, the exhaust air will have to be made up through leaks in the exterior envelope, allowing contaminated air to enter the building. This could be addressed by the installation of a small make-up air supply unit with HEPA or carbon filters, providing outside air in a “sidestream” application. The VRF system can continue to operate normally -- heating, cooling, or recirculating air through the occupied spaces.

A variable air volume (VAV) system is another common design. This can be a custom or semi-custom air handler within a building mechanical room or on the roof with heating and chilled water coils. It may consist of a packaged rooftop unit that has a heating water coil and direct expansion (DX) refrigerant cooling coil. It could also be a rooftop packaged unit with a natural gas heat exchanger and electric reheat coils at the terminal units. To illustrate the wildfire smoke challenges for this system, reference the second system diagram below that shows the packaged VAV system with heating water.

If possible, adding HEPA and carbon filters to the VAV unit will allow the unit to function normally with a higher pressure drop through the filter sections and the ensuing energy penalty while bringing in outside air. It is unlikely, however, that these filters can be retrofit into existing units due to their size and added air resistance. Lower efficiency filters such as MERV-13 will not eliminate the smoke particles entirely, but could help, and will have a smaller pressure drop on the fan system to allow retrofit within an existing air handler.

There is no doubt that wildfires are destructive and cause great harm to those in close proximity as well as those miles away. We have addressed a few strategies that could alleviate the impacts of HVAC systems bringing smoke-laden outside air into inhabited buildings. If you have additional questions about combating wildfire smoke, please contact us.